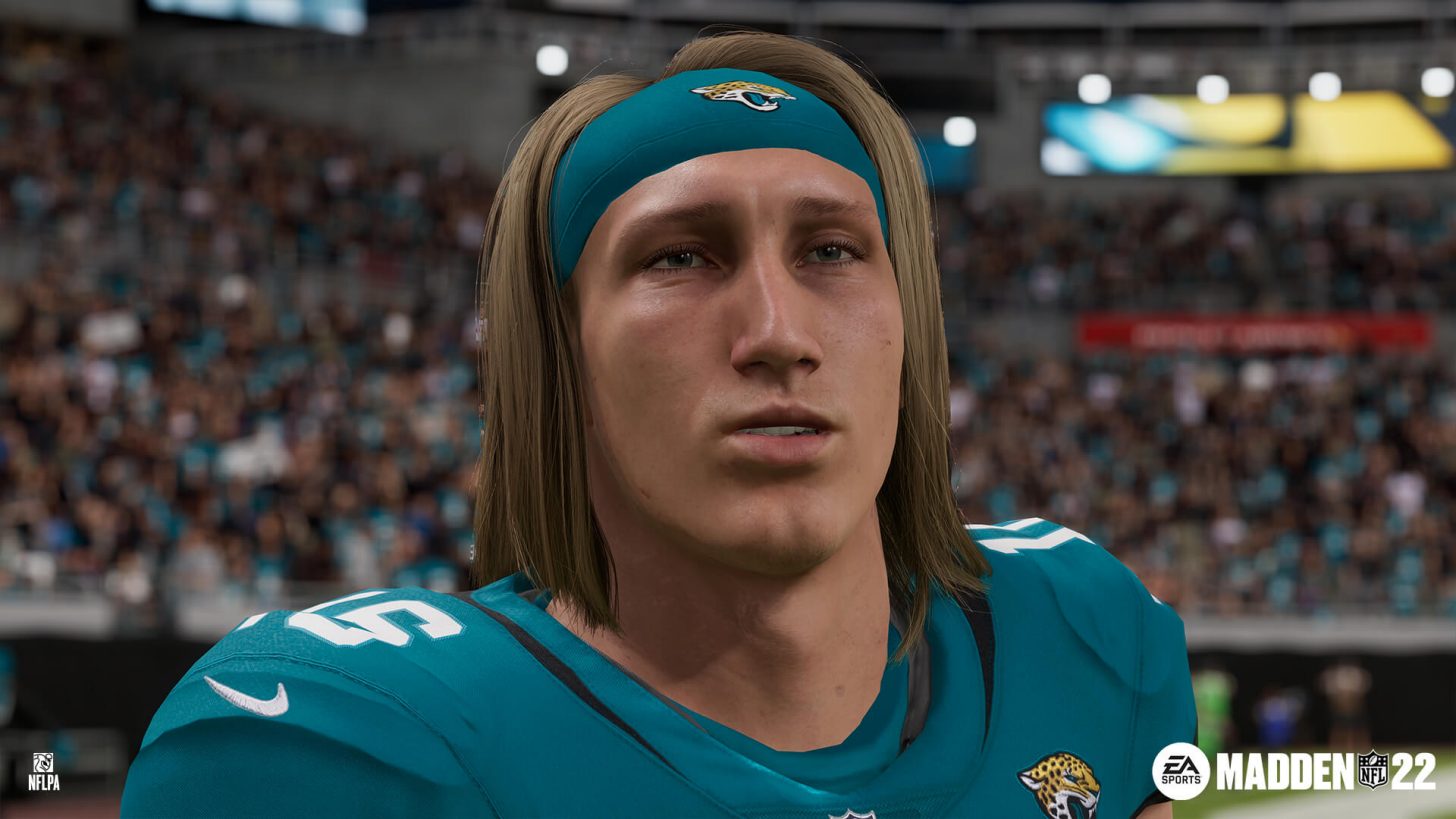 Trevor Lawrence was the No. 1 overall pick in the 2021 NFL Draft and is the highest-rated rookie quarterback in Madden NFL 22.https://www.ea.com/player-ratings-card

Lawrence’s 80 Awareness rating, arguably one of the most important ratings in the game for a quarterback, puts him on the starting-caliber level and it’s one rating that his rookie QB peers don’t come close to. The hype is real, and for good reason; Lawrence threw 90 touchdown passes in his three seasons at Clemson (T-1 in FBS since 2018) and threw for 10,098 yards in that span.

Zach Wilson was the No. 2 overall pick  in the 2021 NFL Draft and is the second highest-rated rookie quarterback in Madden NFL 22.https://www.ea.com/player-ratings-card

His 85 Throw on the Run and 94 Throw Power ratings are both highest in the game among the rookie QB class. Wilson’s 33:3 TD:INT ratio was tops among FBS quarterbacks in 2020. The BYU signal-caller also posted an impressive 73.5 completion percentage, and threw 20 touchdown passes on play-action passes, tied for the most in the FBS.

Trey Lance was the No. 3 overall pick in the 2021 NFL Draft and is tied with Justin Fields as the third-highest rated rookie quarterback in Madden NFL 22.https://www.ea.com/player-ratings-card

He enters the game with 72 Trucking, 86 Ball Carrier Vision, and 77 Break Tackle ratings; These attributes as a ball-carrier make him a dangerous threat as a Madden NFL quarterback, though he’ll most likely start the season as Jimmy Garropolo’s backup in the Bay. Still, the dual-threat quarterback led his team in 2019 with 14 rushing touchdowns and broke school records for both pass yards (2,786) and rush yards (1,100) by a freshman.

The Chicago Bears drafted Justin Fields with the 11th overall pick. Fields has impressive attributes for a rookie, entering Madden NFL 22 with 90 Speed, 90 Acceleration, and 90 Agility ratings, plus 92 Throw Power. Fields is also an accurate deep passer, making him even more of a threat to opposing defenses.https://www.ea.com/player-ratings-card

Ohio State’s 2020 season was only eight games, but Fields posted an impressive 2019 14-game campaign both through the air and on the ground. He logged 41 passing touchdowns and 10 rushing touchdowns in 2019, and accounted for 78 total touchdowns over the last two seasons, most in the FBS. One of this summer’s burning questions surrounds how soon Fields will see the field for the Bears as the team added Andy Dalton this offseason, and he’s slated to start the season under center.

Mac Jones was the 15th overall pick by the New England Patriots. He enters Madden NFL 22 with just a 71 Overall rating but his 84 Deep Accuracy rating is tops among this year’s rookie quarterback class.https://www.ea.com/player-ratings-card

What can you say about Tom Brady (one of two Madden NFL 22 cover stars) that hasn’t already been said? No matter where your team loyalties lie, it’s hard not to admit that Brady is as close to an undisputed GOAT as there has ever been. And it’s not just his experience and resume–Brady is still one of the most intelligent, dominant quarterbacks in the league, as evidenced by his latest Super Bowl win.https://www.ea.com/player-ratings-card

Brady’s Awareness and Accuracy ratings are still absolutely stellar, and he still has the arm strength to hit any target. The seven-time Super Bowl champion, who will turn 44 by the start of the season, shows no signs of slowing down.

Another long-tenured QB who shows no signs of slowing down, Rodgers described the ups and downs of his career frankly, “down years for me are career years for most quarterbacks.” By all accounts, Rodgers is right. Still possessing some of the finest Accuracy and Throw Power ratings in the league, Rodgers truly excels as the best deep ball passer playing the game right now.
https://www.ea.com/player-ratings-card

Whether he’s on the run or under intense pressure from the blitz, Rodgers stays calm and collected as he slings the ball literally anywhere he wants without skipping a beat.

It might seem like calling one of the highest-rated QBs in the game underrated, but Russell Wilson seems to head into every season ready to prove the haters wrong. An escape artist in the pocket with incredible accuracy at every distance, Wilson stays cool under intense pressure and can turn a near-sack into a first down.
https://www.ea.com/player-ratings-card

Despite occasional inconsistencies, Wilson has been a top-five quarterback for nearly a decade at this point, and his awareness and ability to read the game has only improved. When the Seahawks let Russ cook, you can be sure that his receivers get an absolute feast.

Another QB who proves doubters wrong every time he steps on the field, Ravens superstar and Madden NFL 21 cover athlete, Lamar Jackson has perhaps the most unique and varied set of skills in the league.
https://www.ea.com/player-ratings-card

If he needs to grab the ball and pound it through himself, he’s gonna leave a trail of failed tacklers in his wake. If he needs to fire a pinpoint pass across the field to a receiver under pressure, you can be sure he’ll have it on time and on target. You can’t stop Lamar Jackson. You can only hope to contain him.

Deshaun Watson has been one of the most consistent and prolific passers since joining the league in 2017. Watson has set records for the NFL and the Texans in that time, and he led the league in passing yards in 2020.
https://www.ea.com/player-ratings-card

He’s improved in nearly every measurable category for a quarterback over the last couple seasons too, and he’ll likely continue that trend with new offensive weapons at his disposal for the Texans. When you want consistent power and accuracy from your quarterback, look no further than Watson.Player Ratings Database