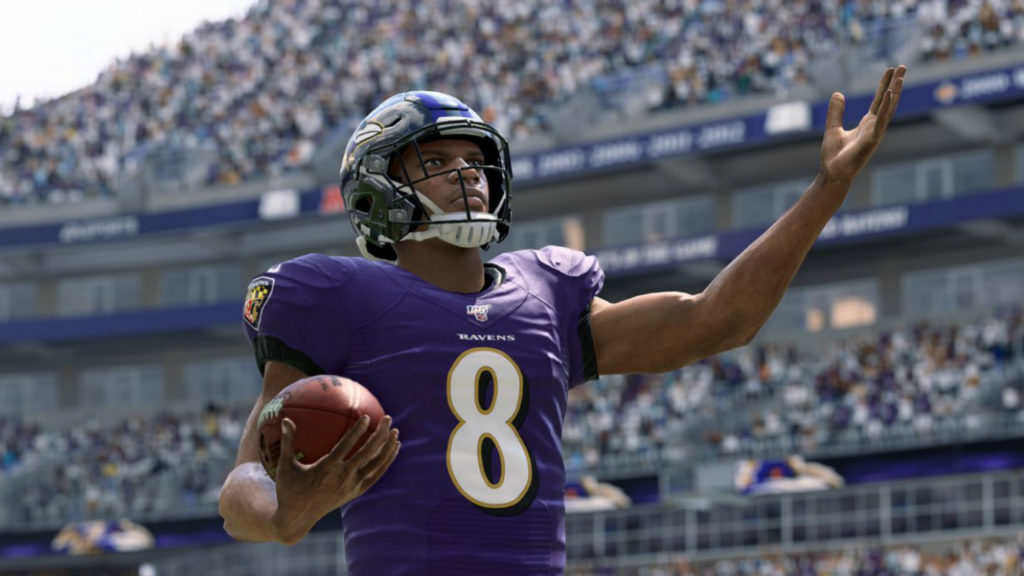 Pre-play Defensive Adjustments Updates
Because EA introduced the new Defensive Back Lock-On mechanic, which can be activated in pre-play, we needed to shuffle around the defensive pre-play mechanics to support it. Pressing LB/L1 will now activate DB Lock-On for your user-controlled player in either pre-play or during play. And RB/R1 is where you’ll now find the Defensive Keys menu that was previously on LB/L1.

DB Lock-On Mechanic
The new Lock-On mechanic allows you to lock your user-controlled player into man coverage behavior on a specific receiver when holding down the LB/L1 button. While locked on, you can steer your player relative to the leverage on the locked-on receiver rather than the whole field, so this allows you to have more control over the movement of your defender. When in the lock-on state, you do have to react to WR cut-moves within a timing window based on the player coverage ratings to stay with receivers making direction changes in route-running.

Ball Carrier Archetype Run Styles
An additional feature of depth coming to Madden NFL 21 via the Skill Stick system is the concept of ball carrier archetypes that directly impact the run-cycle and special moves each player will use. Here’s a quick breakdown of how this works, based on ratings, height and weight:

Below are the topics of feedback that received the most votes during the Madden NFL 21 Closed Beta with the response to the feedback from the Madden Development Team:

User on defense feels slow/sluggish
While the feedback around this was consistent, it was also very polarizing. The speed at which defenders change of direction will be largely unchanged because the vision for gameplay balance is focused more on authentic player movements and strategic decisions. While we are investigating to ensure there are no bugs in player movement that could be having unintended consequences, the intent of this system is to reduce the area of the field a single defensive player can cover based on ratings and direction changes, and encourage coverage defenders to makes choices about what routes they want to take away. As player ratings increase, the amount of ground a player can cover will also increase.

Change back Hurdle/Truck
Due to player feedback in the beta, EA have changed the Hurdle and Truck button inputs back to the way they functioned previously. Players told us the previous button mappings were more intuitive felt like the new controller scheme was cumbersome to learn. Here’s some important notes on the change:

Players aren’t reacting to the ball when thrown (both offense and defense)
These cases displayed bugs in our catching system, typically around missing catch animation coverage. This issue will be significantly improved for launch, and we will continue to support this area via Title Updates, if more cases pop up.
Dropped interceptions occurring too frequently was another piece of common feedback we heard and these were also related to the bugs in the catching system. These have been cleaned up for launch and is another area we’ll be supporting post-launch if necessary.

Zone Coverage doesn’t feel effective
When the beta started, zone coverage systems weren’t completely tuned yet, so much of this feedback was expected. Here’s a detailed outline of what to expect from Zone Coverage upon launch:

Player Switching Logic doesn’t feel intuitive
The beta had some changes to player switching logic that we wanted to get more testing and feedback on in an attempt to make some improvements to downfield player-switching. Based on that feedback, those changes had more unintended negative consequences than we’d like, so we’ve removed those changes, so player-switch logic will be the same as it was in Madden 20 for launch of Madden 21.

Film Study Ability
Outside of the feedback around the defensive user, this ability led to the most polarizing topic among our community and it’s exactly the feedback we were looking for. We included this ability in the beta to get a gauge from our players about how this could function in the game. While the Film Study ability will not be available in the game for launch, we do plan to introduce it later in the year via Title Update. We are going to continue to iterate, balance and tune the ability to make it as fair and balanced as possible for all our players before we release it, and all the feedback we got from the community will be extremely helpful towards that iteration.

AI pass-rush doesn’t seem as effective as user pass-rush
EA have slightly boosted the win probabilities of AI-controlled pass rushers on Simulation All-Pro, Competitive All-Pro and Competitive All-Madden, which will make higher-rated pass rushers have a bit more impact when AI-controlled. For context around this tuning, the stats from the beta showed an average of less than 1 defensive sack per game, while we are targeting closer to 2 per game.

To balance this tuning, we’ve also added in logic for pass-block double teams to fully utilize the blocker resistance system. This means that when rushing against double teams, any memory built up against the rusher to that point in the game will count towards the rusher for both blockers in the double team, making it harder to beat double teams.

QB’s can be stripped in the pocket without starting a throw on Competitive
EA received feedback that told us QB’s fumbling before starting a throw was unfair for the Competitive game style. In response, we have disabled strip sacks on QB’s inside the pocket, with the exception of pass rushers with the Strip Specialist ability. This change applies to Competitive only across all difficulties.

‘Past Max THP’ passing feedback and Penalty
When the Throw Power (THP) max is hit by a QB per his THP rating, we have made a change so that a QB cannot be hit with both an Accuracy penalty and a Power penalty on the same throw (except on Crossbody throws), as this was causing throws to be wildly off-target and was confusing to players. We have also updated the passing feedback text to be clearer for this specific passing penalty, so instead of it reading ‘Past Max THP,’ it will now say ‘Out of Range.’ This is applied when trying to throw to a receiver who is further downfield than the QB’s THP rating can reach.

The following bugs have been fixed for launch.