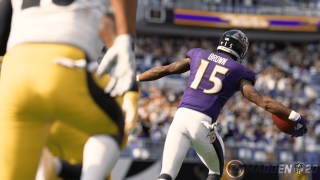 Marquise “Hollywood” Brown is a 5-foot-9, 166-pound speed demon out of Oklahoma. The deep threat drafted by the Baltimore Ravens in the first round, Brown (cousin of Madden 19 cover athlete Antonio Brown) has drawn comparisons to speedy veteran receiver DeSean Jackson, and one NFL scout said Brown possessed “terrifying top-end speed.” Our Madden Ratings Adjustors agreed, as Brown takes over as the second-fastest WR in Madden 20 at launch, with a 97 Speed rating and 95 Acceleration. The combination of Brown and Ravens’ mobile QB Lamar Jackson should make for a highly dangerous duo on gameday, both on the sticks and in reality.

Look man, D.K. Metcalf is kind of a beast in Madden 20. The 6-foot-3, 228-pound specimen has top-shelf 95 Speed paired with 93 Acceleration, plus a 77 Strength rating and an 81 Break Tackle rating which will allow him to power through contact. Throw in a 94 Jumping score for good measure. Yeah, he’s going to be a problem. Metcalf’s magician of a quarterback, Superstar X-Factor Russell Wilson, is known to extend plays to make big things happen, and the rookie WR should be a big part of the plan for the Seattle offense and for your Madden 20 game sessions.

With average speed, N’Keal Harry’s 84 Catching rating is highest among the top five rookie WRs in Madden 20. Known for his strong hands and respected ball skills, Harry is likely to become a playmaker when combined with Tom Brady’s Superstar X-Factor abilities.

Not the fastest, nor the most agile of the top rookie WRs in Madden 20, J.J. Arcega-Whiteside’s various catching ratings are tops in the class. His 89 Spectacular Catch rating and 87 Catch In Traffic rating separate the Stanford standout from the other rookie receivers.

He’s big (6-foot-5), fast, and physical, and Hakeem Butler might just be a perfect fit for the Cardinals new-look offense. Butler has an 87 Spectacular Catch rating, an 84 Catch In Traffic rating, and an 80 Break Tackle rating coming into Madden 20. There might be some fireworks flying in Arizona this season between Butler and his rookie QB teammate, Kyler Murray.