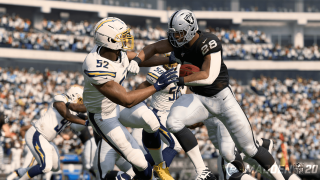 A power back with an 85 Trucking rating, 83 Break Tackle rating, and an 83 Stiff Arm score, Josh Jacobs landed in an opportunity-abundant situation where he’s likely to lead the Oakland backfield in snaps. If he flashes early on, there’s a chance Jacobs evolves into a workhorse for the Raiders and becomes a go-to back in goal-line and short-yardage situations in Madden 20.

Likely to begin the year as a compliment to LeSean McCoy in Buffalo, Devin Singletary profiles as an elusive back in Madden 20. He starts the season with a 90 Agility score, 89 Acceleration, and an 86 Juke Move mark. Singletary ownes a smaller frame at 5-foot-8, 203-pounds, but he handled a big workload in college logging over 700 attempts for nearly 4,300 yards and 66 touchdowns.

The Penn State product finds himself in a crowded backfield in Philadelphia, as he’ll compete for snaps with Jordan Howard, Corey Clement, and Josh Adams among others. Mile Sanders has a good 89 Speed rating reflecting his 4.49 forty-yard-dash time to go along with an 83 Juke Move rating.

Darrell Henderson Jr. may be more than just Todd Gurley’s backup. He’s been generating some offseason buzz thanks to his explosive skillset that Rams General Manager Les Snead compared to that of Madden 20 Superstar X-Factor Alvin Kamara. Henderson starts the year with a 95 Acceleration rating and an 85 Juke Move, so he’s bound to put some defenders on skates. Gurley has been dealing with injury concerns, and Los Angeles could let Henderson prove himself with opportunities in one of the most productive offenses in the NFL.

There is speculation that David Montgomery will be the Chicago Bears lead running back, with some kind of committee rotation behind him. His 58 receptions over his final two college seasons prove that he can be a three-down back, and have led to his 71 Catching rating, highest among the top five rookie HBs. But the Bears can’t waste Tarik Cohen’s dynamic skillset either. No matter, Montgomery is a legitimate upgrade over the team’s former early-down plodder, Jordan Howard.