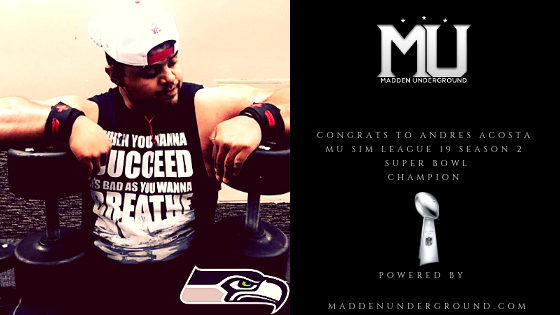 Andres Acosta and his Seahawks put together an almost flawless season. After completing the regular season with a 15-1 record, the writing was on the wall Acosta was the favorite to win it all. Many believed that only season 1 champion Black Phoenix would stand in his way, but after a Divisional round upset by Big Game James Watkins and his Atlanta  Falcons. Black Phoenix was left watch the NFC Championship from the stands. Acosta displayed great resilience through out the playoffs defeating each opponent he faced in a championship fashion.  Acosta would go on to the Super Bowl and dominate. Manifesting what he and the players in his locker room believed all season, that they were a championship caliber team.