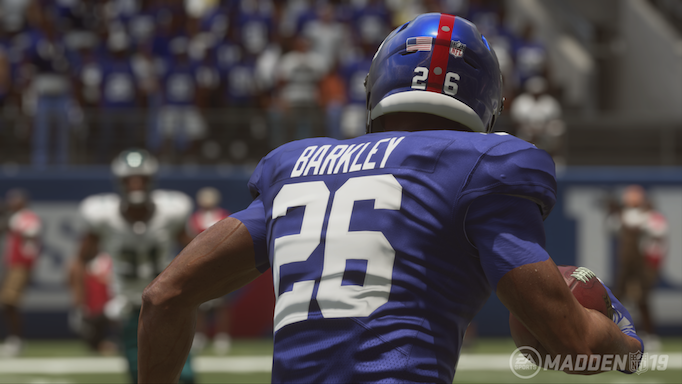 Standing at 6′ 5″, 325 pounds, Nelson is a beast among men. The Notre Dame product was the first offensive lineman off the board in the 2018 NFL Draft. While he might not be the most exciting player for gamers, Nelson is an instant upgrade to the Colts’ weak O-line. His 97 Strength is outdone only by Ndamukong Suh. Nelson is more effective as a run blocker with an 85 rating but isn’t a liability in Pass Blocking with a score of 82. In the NFL and Madden, Nelson is the Colts’ best chance at keeping their QB upright.

A legit draft stud, Barkley is a quality runner that immediately adds another level of offensive depth to a team that sorely needed it. Coming into the NFL with an 82 OVR, a solid score for a rookie, his base ratings make him an excellent runner for players with adequate stick skills. Barkley sports a 92 Speed, and a 93 Acceleration. His ball carrying moves include an 83 Trucking, 83 Stiff Arm, 86 Spin, and a 91 Juke. He’s a pure rusher with his less than stellar Route Running scores, but he can quickly become a community favorite for players looking for a well-balanced rusher.

Well, the Browns drafted a QB. Again. While that might be a bit of a broken record for the Dawg Pound, this roster is showing tremendous promise. Coach Hue Jackson might want to ease him into a starting role, but the team clearly believes in Mayfield as their future investment. An 81 Speed doesn’t make Mayfield the fastest QB we’ve seen, but pair that with a 95 Throw Power, 88 Throw on the Run, and accuracy scores in the 80s at Short, Medium and Deep ranges means he’s not completely reliant on pocket protection to be a playmaker.

Smith has the makings of a Pro Bowl level talent. The Bears added him to help build a linebacker core that already included Danny Trevathan. Smith can be disruptive all over the field with several ratings in the high 80s. His 88 Tackle and 87 Hit Power are enough to stop most ball carriers cold, but his numbers make him a natural fit in coverage, too. Smith sports an 89 Speed, 91 Acceleration, 88 Agility, with an 89 Pursuit and 80 in Zone Coverage.

The Broncos turned up their pressure a bit by drafting Chubb, arguably the most impactful defensive player in the 2018 NFL Draft. The site of Von Miller rushing the QB on one side with Chubb collapsing the pocket on the other is scary. Chubb’s ratings are pretty straight forward for a rookie DE with an 83 Speed and 91 Strength. He also comes equipped with an 85 Finesse Move rating, that being his trick-of-choice to break beyond the line of scrimmage.