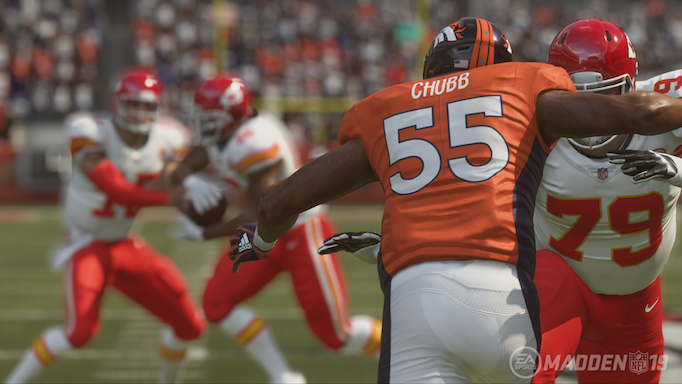 The Bears stepped up their defensive game when drafting Smith. The focus on his attributes shines on pass coverage. He’s not the fastest linebacker of the rookie class, but his 89 Speed helps him cover a great portion of the field and an 88 Tackle rating is the best among defensive rookies. With an 80 in Zone Coverage, he’s right at home cutting off the middle of the field. He could be the league’s next tackle machine.

The Broncos are looking to right the ship on defense and return to their elite stopping status. Chubb is a giant step in that direction. An 85 Finesse Move and 87 Block Shedding ensure he’ll place constant pressure on QBs, if not take them down. An 86 Jump will also help bat some short passes.

The Chargers defense has quickly evolved into one of the grittier units in the NFL. That fact was further solidified with James, who brings a 90 Hit Power to the team, which is the strongest among the rookie class. James also carries a 90 Speed with an 81 Man Coverage.

Ward provides shutdown corner potential to a talented Browns’ defensive front. With an outstanding pair of scores in a 95 Speed and 95 Agility, Ward will be able to keep up with just about any receiver. His Catch rating isn’t high, but a 92 Jump adds to his User Lurk potential.

Vea is a beast of a run stopper. His 97 Strength blasts him up towards the strongest in the league. Like most rookie DTs, he doesn’t have the Power or Finesse move to break passed the line too often, but his size and power provide more than enough to disrupt the run.