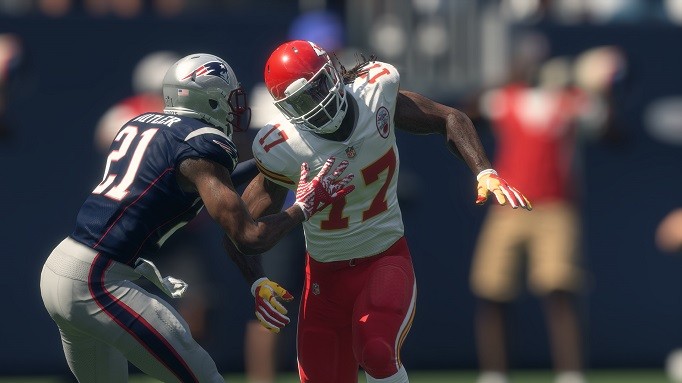 Madden NFL 18 brings a unique meta-game to the gridiron, with new WR/DB mechanics. Tailored for MUT Squads, but available for use in all game modes, the battle that happens between wide receivers and defensive backs will have a big impact on the passing game.

The Highlight Coverage indicator is an on-field assignment that tells your user-controlled player about his assignment in pass coverage, based on the play called.  When applicable, you’ll see lines linking your player to the receivers he should be leveraging in his zone (or in man coverage), as well as a recommended path arrow showing you where he should be moving to properly leverage his targets. This tool is critical in learning all the right reads in pass coverage and can be easily toggled ON/OFF via the Visual Settings menu.

When controlling a defender in coverage who is in range to press the receiver, there’s a whole set of interactions available by using the RS.  The defender can press right or left on the stick to funnel the receiver to either side when in man or zone coverage.

Also when in man coverage, there are two additional presses available. You can be more aggressive and go for a Jam straight down the middle of the receiver or, when playing off by about 3-4 yards, you can also press up on the RS to lock up on your receiver and follow him up the field. The interactions triggered will be completely contextual based on the coverage called from the Playbook menu. You’ll see chucks in zone coverage and presses in man coverage. When using the press mechanics, there’s a risk and reward to the decisions you make so make sure to decide what you want to take away when pressing and use your teammates’ help to your advantage.  The animation variety will be decided by the Strength rating match-up between the two players, while the win/loss result is the match-up between Press vs. Beat Press (Release). And for the first time in Madden’s history, you can even manually press a tight end.

Another big game-changer for defensive coverage is the new auto-interactions. When a receiver and defender run into each other during a route, you’ll see contextually appropriate two-player animations that take into account the assignments of both players, as well as their Awareness ratings. In some cases, this can throw off the timing of your routes just long enough to get the pass rush home, or even take one of the players completely out of the play if they aren’t aware enough to know what do on contact.

On offense, for every press a defender can execute, the receiver will have a counter mechanic to either avoid being pressed altogether, or counter out of a press once in an interaction. When controlling a receiver and anticipating a press, or chuck from the defender over top of you, there are four different techniques available to avoid the press.

The meta-game between the WR and the DB lies in the direction each player chooses when the ball is snapped, as well as a heavy influence by the ratings of the players involved.  If the receiver wants to release to the inside, but the defender is pressing to the inside, the defender will have a much higher chance to win that interaction and prevent the receiver from getting into his route on time, or get any separation. You’ll also see different outcomes from elite players that are not available for players who aren’t rated as highly.

Here’s a table that shows the base results for each action relative to DB pressing vs. WR releases, if all ratings are equal:

Cut-out-of-Press Mechanic: Don’t worry if you guess wrong and fail to avoid being pressed. When playing as a receiver, and finding yourself in a press interaction, you can attempt to cut out of the press and get into your route by using the RS in any direction. Based on the leverage of the defender and the direction the receiver is trying to release, you’ll see many different techniques and outcomes for the receiver trying to get open. The win/loss result of the interaction is based on the receiver’s Beat Press + Strength ratings vs. the defender’s Press + Strength ratings.

Route-Running and Cut-Move Mechanics: Once you are into your route-stem and out of any interactions that may trigger off the line, there’s some important mechanics to note when finishing your route. The LS will steer the receiver anywhere you want him to go, but when using only LS, you cannot make any sharp cuts to gain separation.  To make sharp cuts, you must hold down the RB/R1 button to lock in your current moving direction and then flick the RS in one of eight directions to make a sharp cut. This can be used as a combo, as well to make double moves and fake out man coverage defenders.  LS control will not be returned until the RB/R1 button is released.

Call-for-Ball: Lastly, we’ve improved our current Call-for-Ball mechanic to give a visual indicator to your quarterback that you’re open. When you want the ball, simply press the A/X button and your player indicator will light up to tell your QB in MUT Squads you are open. This will be accompanied by the ‘call-for-ball’ animation.

While these mechanics were spawned for the Team Play style of MUT Squads, all are available to be used in all modes, including Franchise, MUT, and online H2H. Even the AI-controlled players will be using the mechanics, again based heavily on their assignment on the given play call and their relevant ratings to each situation.  This new meta completely changes the way the passing game plays, and WR/DB mechanics are something you’ll want to get familiar with to become a Madden Champion.