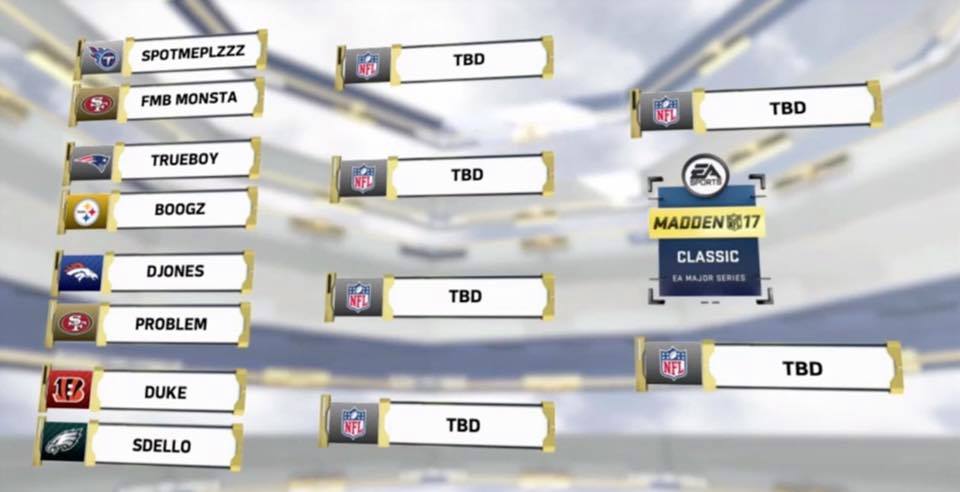 The Ea Madden Classic has been nothing less than awesome, every single competitor has given all they have to advance. Twitch numbers are great , trending on twitter, and broadcasting on the NFL Network only sets a perfect stage for one of the most intense events in Madden history.  With a 100k prize pool  some one is leaving Burbank, California with money bags, Below is our Prediction on the Madden NFL 17 Classic Tournament.

We have SPOTMEPLZZZ DEFEATING the tough FMB Monsta aka MY MONEY ON JUAN BY 7 and advancing to the Semi Finals.

We have BOOGZ edging the west coast native TRUBOY by 10 in a epic battle advancing Boogz to the Semi Finals to face SPOTMEPLZZZ.

We have PROBLEM defeating DJONES by 14 . There is no way you can let PROBLEM watch you play for an entire day and not expect the GOAT to put something together. PROBLEM Runs the ball way too much to lose this game.

WE have  DUKE BEATING SDELLO . SDELLO is one hell of a competitor but Duke is the more polished of the 2 we expect a 13 point victory.

This was the Most difficult scenario to select a winner for. Boogz looks hungry and un rattled. SPOTMEPLZZZ looks sharper than ever.Both competitors have Families back home waiting for them so there will be blood and guts all over the field. We expect it come down to who ever has the ball last to win. If we just absolutely have to choose a winner out of game we are going to go with SPOTMEPLZZZ.

DUKE has been on fire through out the entire tournament, and Problem just finds ways to win. This game will also be a hard one to call. I think it starts and ends with what version of PROBLEM SHOWS UP. If he shows up as the sponsored gamer with all the accolades, the guy who” has been there been here before ” as RG would say , or Problem the streamer, or the guy playing on Madden NFL America with mittens on Duke will pop him with out a doubt. But if Problem shows up quiet, angry, pissed of at how he was not the Favorite to make it this far given all he has done,  then oh yeah  we got a Problem !!!!! And he may win this . Duke will fight and fight hard but we think he will come up just short of Victory  and Problem will advance to the finals.

SPOTMEPLZZZ has a wife , a job, a new baby , he is the every day gamer. When you look at SPOTMEPLZZZ you see yourself on tv playing MADDEN. SPOTMEPLZZZ is the American Dream in the eyes of Madden players and he can out right ball. PROBLEM is the machine, I think he has learned from his mistakes and wants to prove he is still The GOAT. We expect this to be a great game if it all plays out this way with SPOTMEPLZZZ taking home 30k and the Title.

This is just 1 of many possible scenarios feel free to leave your picks in the comment section below.