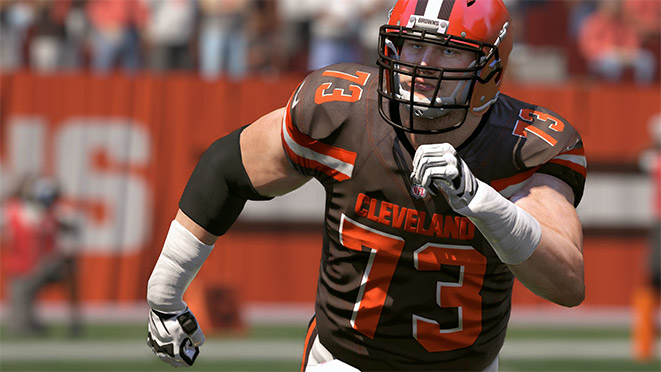 Games are won and decided in the trenches.

Here are the top-rated offensive linemen in Madden NFL 17.

Thomas is a bright spot for the Browns headed into the 2016 NFL season. With 98 pass block and 93 run block he is the premier left tackle in the game.

With 72 speed, Smith is one of the fastest offensive linemen in Madden NFL 17.  He is the leader of the talented Dallas Cowboy’s offensive unit and with 98 run blocking and 97 pass blocking he will dominate games from start to finish.

Yanda is the  highest OVR rated guard in Madden NFL 17.  His 93 strength, 98 run blocking and 96 pass blocking will make him a key to the Ravens’ offensive success this season.

Whitworth is the Bengals anchor on the offensive line and will set the tone for their offense. He brings balance to the Bengals’ front five with 93 strength, 94 run blocking and 95 pass blocking.

The Cowboys look to grind out games by dominating the line of scrimmage with young talented offensive linemen. Martin plays alongside Tyron Smith and helps protect one of the leagues best quarterbacks in Tony Romo.

With 75 speed and 81 acceleration Williams will play great in space. Utilize his speed and quickness by calling stretch running plays as well as roll out play action passing plays.

Armstead is the leagues fastest offensive linemen with 80 speed. He will play best while protecting star quarterback Drew Brees with his 95 pass blocking.

Frederick is the only center to make this list and the 3rd Dallas Cowboy offensive linemen in the top 10. Focus your run game towards Frederick as his 96 run blocking will help you dominate opposing defenses.

Lang brings a physicality presence to the Packers offensive line and is a well rounded big man. With 91 run blocking and 94 pass blocking he will be a leader for this unit. His 86 strength will allow him to establish himself as a power first player for the Packers.

The second Packer in the top 10, Sitton plays alongside Lang as the opposing guard and brings 91 strength, 88 run block, and 96 pass blocking which ranks 3rd best in the game.