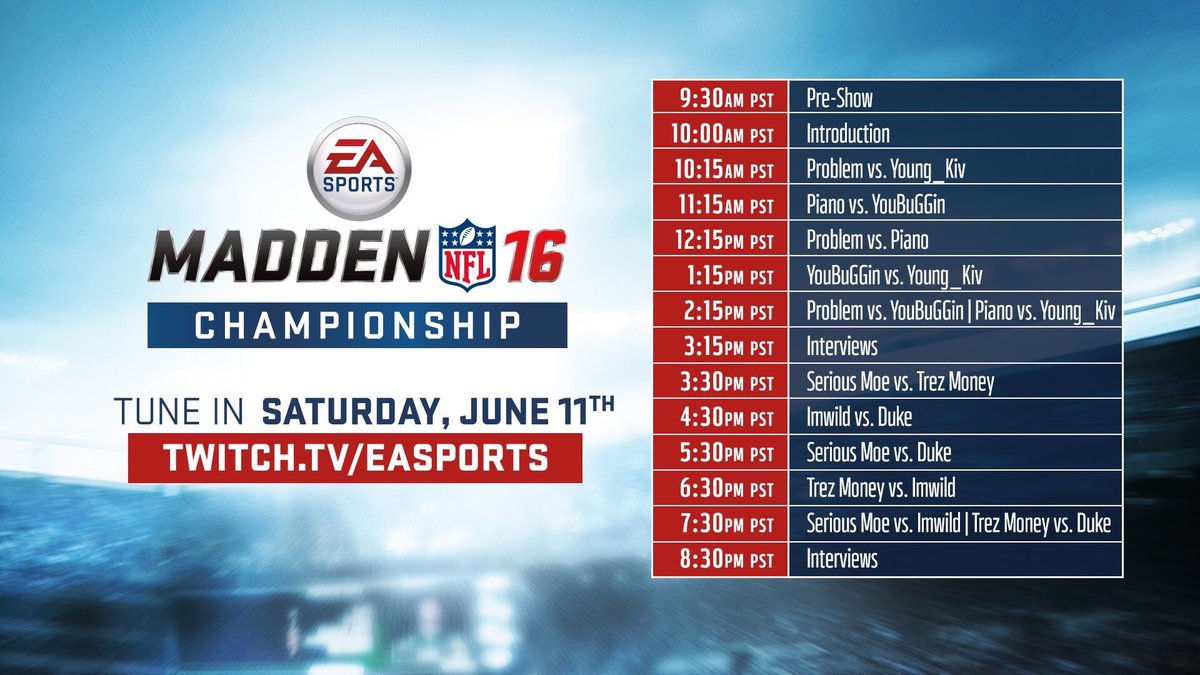 Saturday June 11th was the second day of Group Play for the Madden Championship to decide the next four who would play in the Finals on Monday. We had groups C and D go into action consisting of few new players trying to make a name for themselves like Piano and YouBuggin from the Comepete4Ever League , TrezMoney, ImWyld, and Young Kiv. Also some familiar faces as we had an old vet in the Duke, the G.O.AT. Problem in the building, and the defending Madden Challenge Champion Serious Moe we were in for an exciting day.

The first group to start the day off was Group C which consists of Problem, Kiv, Piano and YouBuggin. The first game started off with a classic with Problem taking on his young boy Kiv. The two competitors went back in fourth against each other until it came down to the final drive. It was Problem ball down 8 to Young Kiv. Its 4th and Goal and Problem needed a few yards to get 7, he hikes the ball and gives it to the FB and gets popped short. Young Kiv comes through with a hard fought victory against Problem to move to 1-0 to start the day. Another great game we had was YouBuggin vs Young Kiv, this game was mostly defense throughout the day with one stop that could change the whole game. Well Young Kiv was driving down the field to help secure the game for him until YouBuggin got a big fumble which changed the whole momentum of the game and only minute left to go. This was YouBuggin chance to bounce back from his first lost and secure a win but he ends making a bad read under pressure and gives the ball right back to Kiv costing him the game and helping Kiv moved to 2-0. Throughout group play Kiv was able to remain undefeated and Problem was able to bounce back and finish 2-1. Piano and YouBuggin played great and showed everyone that they are just getting started.

Now on to Group D play this group consisted of Serious Moe, TrezMoney, Duke, and ImWyld. Serious Moe the defending champion was focus throughout the day and he took care of business and easily went 3-0 in his group to advance to the Finals on Monday. Now the game that would be talked about for a while was Duke vs TrezMoney. Before the game even started a lot people had Duke as the favorite to win this game and head on the finals, but Trez had a different story. Early on in the game Duke was in controlled and it look like he would easily come away with win. That all change in the 4th qtr when Duke was up and making a bad read giving Trez new life and chance to take a lead in which he did. Duke drove all way back down the field to take 3 point lead with only about 47 seconds left All Duke needed was a stop and the game was his but Trez wasn’t going down without fighting back as he drove down to midfield with only 7 seconds left and no timeouts remaining. Trez comes out in a spread formation with Tony Gonzalez lined out wide by himself. Trez hikes the ball with time in the pocket and throws up a prayer to Tony G with two people on him, and he catches it!!! The announcers went wild and couldn’t believe it, they said “Do you believe in miracles?” because that’s exactly what happen. Trez came away with a miracle that stole all of Duke dreams a way of making the finals all because of one Hail Mary. With that game being over ImWyld had life once again to make to the Finals in which he did base on point differential. So now the Finals have been set. We have Moe, Young Kiv, Problem, and ImWyld moving on to Monday Finals. Can the defending Champ bring it to back to back to become the Undisputed Champion? Or will Problem claim the title one again showing why he is consider to be the Greatest? Or will a whole new Era of Madden begin with a new Champion being crowned going into the Madden 17 year.

Click here to watch day 2 of the Madden Championship