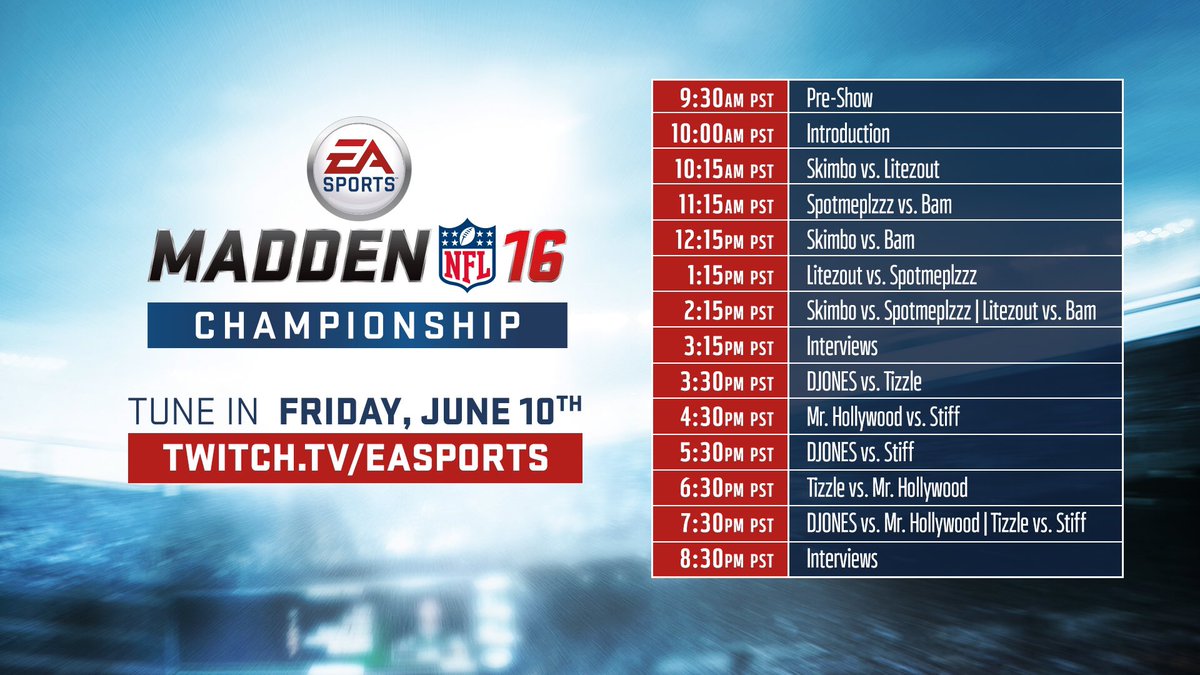 Yesterday was  start of the first ever Madden 16 Championships. You could feel the excitement in the air as EA was on its way bring eSports back to Madden in a big way. They had live commentary from RG, SGibs, Scott Cole, ZFarls, and even a surprise appearance from Patrick Peterson himself. They even had team breakdowns and post-game interviews from Faruq and SGibs.

With $50,000 on the line first two groups took the stage, Group A consisted of Bam, Skimbo, Litezout, and Spotmeplzzz and Group B consisted of Tizzle, Hollywood, Steel, and Djones. For these groups you could tell it was going to be tough for two people to make it out them. From the Group A games it started off with runner up from Draft Champions Madden Challenge Skimbo taking on Litezout from MaddenDaily who also qualified for the DC challenge as well and was looking for redemption this time around. Litez wasn’t playing any games to this time as he took a commanding lead against Skimbo with his high powered offense. Litez was able to come out on top easily in his first game to start 1-0. The game that really stood out in this group had to be Litez vs Spotmeplzzz in which this game came down to wire as both sides were playing great defense throughout the whole the game. It would come down to the last drive with Spotme having the ball and Litez needing a stop but Spotme was able to clutch up and get the 1st down to put the game away 16-13. Another great game from this group was Skimbo vs SpotmePlzz, with Skimbo needing this win to make to the playoffs this game would come down to wire, with both offenses going back in forth and it coming down to one last drive. Skimbo is down 3 with ball drives all the way to the redzone and comes up on a big 4th down and instead of taking 3 and going for the OT, he goes for it to win it all. He throws a high pass up to Mike Evans but its defended greatly and Spotmeplzzz ends up winning, While they were playing Litez was able to get his second win against Bam which was enough for him to make the playoffs. So Spotmeplzz who went 3-0 and Litez 2-1 both advance to the playoffs on Monday.

Now for Group B as you know we had Hollywood, Steel, Tizzle, and DJones. This group started off with a bang with the 2nd game between Steel vs Hollywood turning into a shootout in the 4th quarter. With this game coming down to the last drive we had Stiff up 3 and Hollywood driving looking to score 7 and take the lead. Stiff didn’t allow him to get 7 but unfortunately he was able to get 3 which sent game to OT. Hollywood starts off with the ball in OT and drives all way down to Stiff red zone. Stiff was able to stop his first one on the goal line but the second with a FB Dive to Neal was able to seal the game for Hollywood. Stiff fought hard that game but wasn’t able to put it away. Throughout the group Hollywood was able to go undefeated and finish 3-0 to claim his spot in the playoffs. Now one with final spot remaining it came down to Stiff and Tizzle. It was a low scoring game with it being 13-10 in the 4th quarter but a costly fumble Tizzle cost him the game giving Stiff the ball back and clocking. Tizzle needed to make a stop but couldn’t get it and Steven Jackson score to make it 20-10 to put the game away. So with Stiff was able to clinch his spot for the playoffs. Throughout the day we had some great games and everybody did an excellent job and had a great run making it there. Congrats to everyone and what will Day 2 of Madden 16 Championships show for us? Stay tuned!

By Chris “The Assassin” Goodman