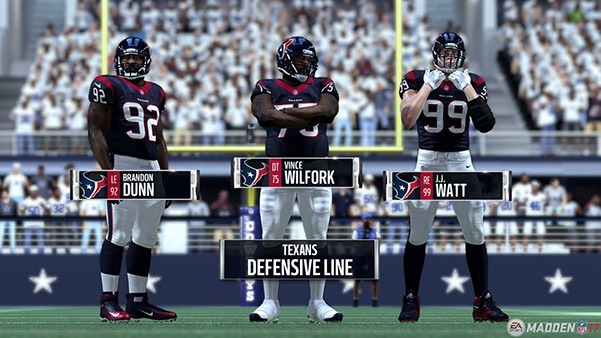 Madden NFL 17  brings even more authenticity to Broadcast Presentation this year. From the beginning sequence of heading into game you will notice the “rock concert” feel that you see so often on real NFL Broadcasts.

EA aimed to immerse you from beginning to end with updated stadiums and jumbotrons from across the league – adding another layer to the look and authenticity of each venue.Broadcast and Presentation is all about getting you closer to the action and with our new lineups introduction you will see even more swagger and personality than ever before in Madden NFL 17. We’re able to do things that push the limits of what broadcast wishes it could do.

Some of the most exciting plays in the NFL occur near the pylons in each corner of the endzone. Now, in Madden NFL 17 we have introduced Pylon cameras that bring you down to field level and make you feel the intensity of the games biggest moments. We continue to push for innovation beyond your typical Broadcast to deliver the most authentic experience to date. Whether a sideline toe tap catch, or dive into the corner of the endzone, the Madden NFL 17 Pylon camera will bring added depth to this years game.

In Madden NFL 17 EA have introduced new cameras as well as speed ramping into the shots we capture on field. EA will now show off that amazing user catch with an impactful super slow motion moment to represent what you see on NFL Broadcasts. See the play from every angle and relive your games top moments. Additionally we’ve extended our broadcast graphics package into replays highlighting the playmakers delivering the games biggest moments.

One of the newest additions to this years game is the addition of Multi-Cam. Starting with the conclusion of the play  cameras will focus in on the ball carrier and now have the ability to re-target additional on field players or even your coach all in one cut. You will feel this when you get on the sticks and see how this subtle change makes you feel more connected to the entire Broadcast.

Everything you see is in real-time and is happening behind the scenes, something that they were never able to capture before is now a reality in Madden NFL 17. You will notice this most when our UI pop-ups showcase you information post-play and our players will coexist with the UI in a 3D environment.

The goals heading into Madden NFL 17 was to bring to life our Coaches even more than they already are. This year head coaches will be more dynamic and aware of the action on the field. EA added increased fidelity to the Head Coaches on the sideline to allow them to have more of a visual and contextual impact during play and in replays. Much like our multi-cam our coaches will now be part of the environment on each play and will be reacting to situations based on the outcome of each play. You will see coaches run down the sidelines and come to life with more animation than they have in previous games. And where you’ll really see this come to life is in Franchise mode playing as a coach. We’ve centered much of the post play camera presentation around your coach’s reaction to big plays, big stops and all the other action on the field.