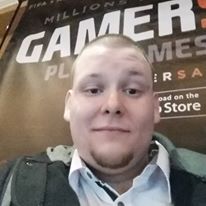 This weekend we had the opportunity to catch up with Rob “Big Grocery” Taylor to discuss all things Madden. Check out what he had to say below.

Brian James : What up Rob hows it going ?

Brian James : We are going to get right into it.

Brian James : You have been a loyal member and contributor to the Madden community for some time now, what do you consider to be your staple?

Rob Taylor :Not to toot my own horn, but since no one will, i feel like i bring entertainment back to the madden tournament community. A lot of people treat this game like a job, a profession, and to a select few it can be. But we all seem to take Madden way too serious,  I’ve always tried to lighten the mood. Whether it be when i first got in the community as a member of EMB and my “role” as capper (see Tyronto vs Litezout from MLG Anaheim) to nowadays hosting tourneys on stream. I just want to Make Madden Fun Again

Brian James :  Coming up who influenced you as a Madden Gamer ?

Rob Taylor : Well just like tons of others, my tournament madden life started with the original Madden Challenges, 32 cities, 32 tourneys, the REAL madden challenge. I had played in 04 and 05 in Indianapolis, my hometown, but I never traveled. In 06 I met KStar and we hit it off and started to travel more and more. My first crew was the nWo of madden, the Elite Madden Ballers bka as eMb. I always looked up to guys like Squeeze, Big B, Brusk, Evil O. OLd school players.

Rob Taylor: As far as being on the mic goes, i looked up to the 2 best to ever do it; Topp Taylor and Bacardi Rico.

Rob Taylor : We gotta find a way to bring that back.

Brian James : When did you get your first opportunity to Madden Commentary ?

Rob Taylor : Ohio. Big City Paul. I helped host a HUGE underground tourney in Columbus. Madden 10 it was, and when i say big i mean it was huge. Ohio used to be a hotbed for Madden. We had guys show up from Indy, Minny, Chicago, Philly, NY, NJ, Tennessee, im talking everywhere

Big City Paul noticed people were entertained by me, he gave me a mic, i try not to look back.

Brian James: How has your Commentary evolved from those days ?

I wanted to be the funny guy that everybody noticed, tried to put MYSELF over, instead of the tourney.

Nowadays i try to take a much more professional approach. Let the viewers know the BACKGROUND of players, history, rivalry, etc. Paint the viewers a picture to go along with what they are seeing.

Breakdowns of why plays worked, give tips. If people wanted to hear Collinsworth and company i would be screwed.

Brian James: What was the best game you ever commentated?

Rob Taylor : Damn
Let me give 2 answers. Online and “offline”
On twitch, i would have to say the best game ive had the pleasure to commentate was in Atlantic City Beasts of Madden tourney, really it was any game from Hollywood that day. He was the creator of the infamous 43 under blitz and it was his first live event. Of course he won the ps4 side. Kid had poise, i enjoyed his run.

Rob Taylor: Gotta love how quickly madden can turn momentum and yet the entire restaurant /bar, including patrons that had no clue there was a madden event there and the atmosphere was like an Nfl game. I honestly miss the Midwest Madden scene.

Brian James : Who has been your best partner during commentary?

Rob Taylor: I’ve had the pleasure of working with some great ppl. Black Baron down in Atlanta (he still has the best lariat in wrestling, shout out my guy The Empbruh Black Baron) One Great User in Atlantic City was tons of fun, but i would have to say Reality Wynn is the man. He carries me, and that’s no small task. He’s had years of experience on the mic and on the sticks. I feel like we mesh incredibly well and really encompass all of Madden. He was winning tournaments before online play existed so his knowledge goes very deep.

Brian James : Who Would you Like to work with in the future ?

Rob Taylor : One day i want to host a tourney with RG Ryan Glick. We gotta find a way!

Brian James : How do you feel about the state of the Madden Community

Rob Taylor: Believe it or not i feel like we are at the beginning stages of something great. We have solid tournament promoters in all corners of the country, we have a good mix of old school and new players that are still going strong, and e-sports is the next big thing in the world.But for this community to really strive, to REALLLLY take off, we have to embrace the new modes

That’s the future. Catch on

Brian James : What are you looking forward to most about Madden 17 ?

Rob Taylor: Getting back in the lab
That feeling you get finding that screamer first night, or you find an unbumpable or there’s a few new formations to try.
Few (pg-13) things can match those feelings
Lab time for sure. Nothing beats it

Brian James : How do you feel about EA leaping into Esports?

Rob Taylor: I hope it works out, but we may have an ace in the hole with Armando being in charge of esports out at the Grand in Las Vegas.
Everything seems proof positive with esports in general, i mean hell TBS has a LIVE esports show debuting this summer

The mainstream aspect is there for LEAGUE of Legends and other mmorpg type games. And of course halo has been huge for years
Why not Madden?

As long as we Make Madden Fun Again

Brian James : With Burbank coming who is your favorite to bring it home?

Brian James : What advice could you give to others who want to get into commentating live tournaments?

Please, whatever you do, don’t give routines. NOBODY visited the twitch stream of a Madden tourney to listen to your stand up. We as hosts aren’t main characters, we are supporting casts, act as so.

Brian James: Thanks Rob really appreciate you taking time out of your busy schedule any thing in closing ?

Rob Taylor: Yea first i wanna say you guys here at Madden Underground do a great job and I truly enjoy reading your articles. Keep it up !

And second i wanna say THANK YOU to everybody that supports the madden community. We need each and every one of you. Keep playing. Keep twitching. Keep traveling
I appreciate everybody who watches any stream i do. My inbox is always open for any questions, comments or concerns.

One thought on “Interview with Rob “Big Grocery” Taylor”