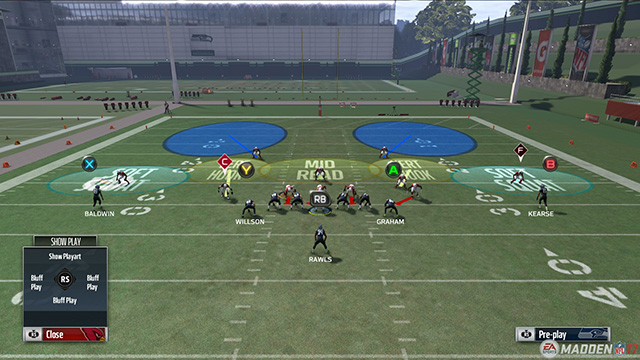 Ea releases new information on zone logic check it out below.

In addition to all of the improvements made to the running game, we’ve also given you more tools on the defensive side of the ball on Madden NFL 17 on Xbox One and PlayStation®4. Zone coverage is fundamental to pass coverage in the NFL. In Madden NFL 17 we’re propagating a core piece of technology we call “Behavior Coordinator” to our zone coverage defenders – more on that below.

Prior to Madden NFL 17, our zone coverage logic was written independent of the play. Simply put, our zone assignments didn’t work together and therefore had no concept of a global scheme. It was a priority based system that evaluated the coverage level of each receiver in order to determine who to pick up. Additionally, we only had three underneath zone coverage assignments (flat, curl flat, and hook) and we had to use those three assignments in a variety of coverages, that in real life, ask the players carrying out those assignments to do drastically different things.

When we began to discuss the improvements made to the QB AI in Madden NFL 16, we detailed our new AI architecture called “Behavior Coordinator”. Behavior Coordinator gives us the ability to create new sets of behaviors for a given situation. At the beginning of the Madden NFL 17 production cycle we decided our underneath zone coverage was the next logical choice that would benefit most by the new AI architecture.

Moving to a new AI architecture meant our underneath zone coverage logic had to be completely rewritten from scratch. We consulted with NFL coaches and players to get a thorough understanding of the various coverage concepts, rules for each player’s assignment, and techniques players use in order to carry out their assignments. This resulted in the creation of ten new zone coverage assignments that can be used to create a variety of coverage concepts (Cover 3 Match, Cover 2 Carry, etc.)

Each new zone coverage assignment has rules and logic in place with the idea that they’ll be used in specific coverages. So in essence, each player in a given coverage concept has knowledge of a global scheme and how everyone’s assignment fits into the scheme. Each player having a global knowledge of the scheme gives them the ability to make “Progression Reads” aka “Pattern Reading/Pattern Matching”. Before we get into the nuts and bolts of Progression Reads for the zone defenders, here’s a high level overview of the new zone coverage assignments.

As mentioned earlier, prior to Madden NFL 17, we had three underneath zone coverage assignments. That number has jumped to ten. In addition to the new zones, the on field Coach Cam art has been updated as well. Each underneath zone has the name in text inside the zone art. This is to give users a clear understanding as to which new zone assignment is being used in each play. The following is a list of the new zone assignments as well as a high level overview of what they are and where they’re used.

Cloud Flat – Flat zone assignment primarily used in Cover 2 type defenses by the outside cornerbacks. The Cloud Flat player is responsible for protecting the outside deep and short areas of Cover 2. His priority is to protect against deep outside routes first and rally to short outside routes second. The Curl Flat passing concept will be a great way to attack this defensive coverage. The curl receiver will drive the cloud flat deep, leaving the underneath flat receiver open.

Hard Flat – Flat zone assignment primarily used in Cover 2 type defenses by the outside cornerbacks. The Hard Flat player is responsible for protecting the outside short areas of Cover 2. His priority is to protect against short outside routes first.

Curl Flat – Zone assignment primarily used by the outside edge players in Cover 3 type defenses. The Curl Flat player is responsible for protecting the outside intermediate and short areas of Cover 3. His priority is to protect against the deeper outside routes first and rally to short outside routes second.

3 Receiver Hook – Zone assignment primarily used by the inside zone defender in Cover 4 type defenses and 3 Deep 3 Under zone blitzes. The 3 Receiver Hook player is responsible for protecting the inside short and intermediate areas of the field. His initial drop is towards the number three receiver in the offensive formation.

Vertical Hook – Zone assignment primarily used by the two outside edge players in Cover 2 type defenses as well as 2 Deep 4 Under zone blitzes. Depending on what coverage they’re used in as well as the route concept by the offense, the Vertical Hook zones can covert to man coverage against the vertical route of an inside receiver.

Middle Read – Zone assignment primarily used by the middle linebacker in Cover 2 type defenses. The Middle Read player is responsible for protecting the deep middle area of Cover 2 defenses. At the beginning of the play he reads the passing strength of the offensive formation to determine if there are receivers threatening the deep middle of the field. To counter the middle read defender, look towards your Levels passing concept. The deep receiver will drive the middle read defender downfield, leaving the underneath option open.

With the addition of the new underneath zone coverage assignments, we took the opportunity to make some tweaks to our Defensive Hot Routes as well as Coverage Adjustments mechanic. Hard Flat is now the defaulted Defensive Hot Route for “Flat”. In Tampa 2 for example, which by default has both cornerbacks in Cloud Flat assignments, a user may decide to have one cornerback play his Cloud Flat and put the cornerback on the other side in a Hard Flat. This is consistent with how some NFL teams make an on field adjustment to the cornerback’s technique based on a formational tendency.

The Coverage Adjustments “Underneath“ will change all flat assignments including Curl, Seam, and Quarter Flats to Hard Flat. A scenario where this may come into play for a user is in a short yardage situation where they may want to play a Cover 3 defense in order to get an extra defender near the line to play the run. They may also want added protection against short passes in the flat, so Coverage Audible Underneath could be used to put both Curl Flat players into Hard Flat. Coverage Adjustment “Overtop” will put Hard Flat and Soft Squat into a Cloud Flat assignment. Overtop will also change Seam and Quarter Flat assignments into Curl Flat assignments.

As we touched on earlier, our underneath defenders in zone coverage now have a global knowledge of the defensive concept they’re playing. The logic and rules that govern how they play, gives the ability to adapt to what the offensive pass concept is as well as complement each other’s assignment. In order to do this we had to first build a “Receiver Count” system.

The following screenshots show some sample offensive sets and the receiver count used by the defense for those sets.

In this offensive set the right side has four receivers and the left side has one.

Up to this point everything we’ve discussed concerning receiver count relates to the pre snap alignment of the receivers. In some defensive coverage concepts, just knowing the pre snap receiver count is all a particular defender needs to know when it comes to carrying out his pass coverage responsibility. However, in most cases defenders need to recognize and understand that the pre and post snap receiver counts will change once the play starts and the pass concept develops.

In the above example, the receivers are aligned in a two receiver bunch alignment. Pre snap #1 is aligned tight near the pre snap #2. When defenses see these types of alignments from the offense they’re generally expecting to get some kind of pass route concept where #1 and #2 will switch once the ball is snapped.

Once the play starts the receivers switch release, meaning they crisscross each other’s path. At this point the original #1 receiver is now the new #2 and the original #2 is now the new #1. Having to know both the pre and post snap receiver counts is a very important aspect of playing a progression read pass defense. In our next blog on our zone coverage improvements, we’ll cover progression reads for our zone defenders in Tampa 2, Cover 3 Match, and 3 and 2 Deep fire zones.

So as you can see, you now have the tools and options in game to stop any type of offense. Has your opponent been running Four Verticals all game? Or what about the dreaded Tight-End Corner Route? Shut it down