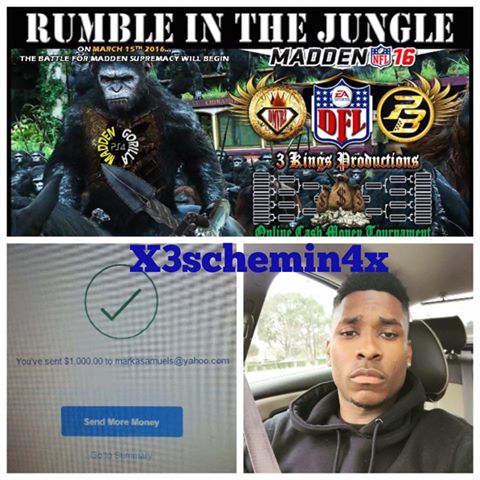 Mark Bam Samuels  has become a house hold name in the Madden Community.  After making the top 64 in the Ea Madden Challenge under his alias x3schemin4x , Winning The” Jump off ”  1k tournament hosted by The DFL,also being named Champion in the Ps4 Madden Underground 1 Tournament. The Bay Area Native has put together quite a resume. We actually had a chance to meet Bam in Vegas at the Gamer Saloon Madden Community Championship. Bam placed in the top 16 on Xbox one and the top 8 on ps4. Bam brings a calm yet passionate approach to the game which allows him to have a focus that’s hard to match making him top tier in the Madden Community .

This Weekend 3king productions concluded it’s 122 man ps4 “Rumble in the Jungle” tournament. “It went down Baby ” in the words of Travis Stephens, who we call the Don King of the Madden Community. A tournament of this Magnitude brought out warriors from all realms especially when you announce a 1,000 $ pot. Rob Hill , Travis Stephens , and the Commissioner Nelson are the 3 heads that made this event possible with the assistance of the Madden All Stars.

Bam Cruised through the “Rumble In The Jungle” tournament. Defeating opponents Lets Groove, Cedrid Fields, Earlyn04, T fonk,and Poloshawty in the final 4. Bam went on to  meet Skimbo in the finals . In a game where both competitors gave a valiant effort Bam would defeat Skimbo 31-13.  Becoming 1,000 dollars richer.