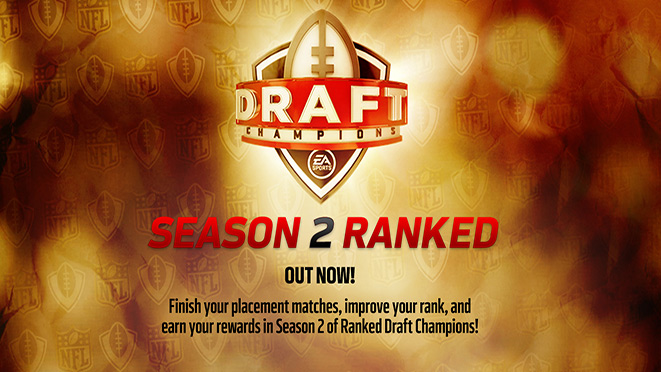 Last week we Ea announced  Season 1 of Draft Champions Ranked was coming to a close and detailed what the Season-ending rewards structure looked like.This week they took a deeper dive into what is changing with Season 2 because it’s much more than incrementing the Season number by a single digit!

For anyone who has yet to play 5 games of Draft Champions Ranked, you’ll start Season 2 by competing in Placement Matches. These games will allow us to understand your level of play in Madden NFL 16 and matchmaker you more accurately once you get out of this phase. Better matchmaking will produce more competitive games which is something we’re always striving to achieve.

When taking a look at the data from Season 1, Ea noticed that users were not progressing as quickly as  intended, even when the user’s games played and overall record should suggest otherwise. Ea adjusted the ranking thresholds to allow users to advance at a more optimal rate.

As you begin playing Season 2, you’ll most likely notice that your rank has changed and there’s a couple of reasons why. Ea wanted to alter your rank based on how you did in Season 1 to group you with other players with the same skill level in order to allow for better matchmaking. Also, keeping in mind with what EA mentioned before about updating the ranking thresholds, some users may notice that they actually rank forward from Season 1. In the case of some of the more elite users from Season 1, you’ll notice that your rank has gone down and while you will have a bit of head start on the competition, you’ll have to prove yourself once again if you want to make it back to the Elite tier.

Season 1 of Draft Champions Ranked let EA identify the top Madden players and qualify them for the Madden Challenge.  The Madden Challenge Online Playoffs produced a lot of excitement and showed off the crazy talent in the Madden Community.  While ea isn’t ready to launch another live tournament series … yet … Season 2 will culminate with an online tournament. The full details of this tournament will be discussed further in the future according to Ea, adding it’s important to know that playing and winning games as soon as Season 2 drops will be counting towards your progress. Rewards for the tournament will also be expressed in a future  but they will include some spectacular in-game content.  Competitors who advance beyond the Season 2 ladder and place high in the online tournament will be considered for future Madden Invitationals during the 2016 calendar year.