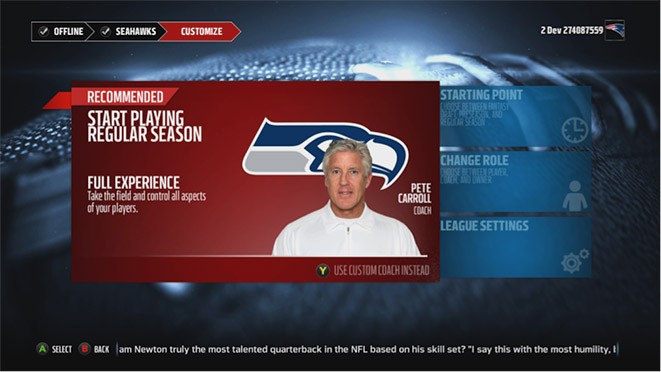 Are you running a CFM or thinking about starting one ? Here are a few helpful tips to get you going or improve what you already have going.

5. Organization : Being Organized plays a huge role in the success of a League . Having a systematic way of doing things gives league members a sense of stability and a sense of professionalism. That means set advance schedules with holidays factored in, Organized off-seasons which include resigning ,free agency and Drafts where all members can attempt to participate. Utilize websites like Madden Underground and Daddy Leagues , so players can keep up with stats and standings and news.

4.Rules: Rules don’t necessarily mean game play rules but at least have a code of conduct and a standard of how things are ran in the league. Rules hold players accountable for actions, and preserve the quality of the league in most cases. Rule also expose bad seeds and players who will eventually be problems if players don’t belong in your league, rules will bring those players to the light. Remember you can’t please every body so don’t try to, but at the same time open to concerns and questions league members may have. No members no league.

3.Recruitment: Recruiting is often fun and easy. With all the social features on both the PS4 and Xbox One console. At time a little to easy ,but remember being a Commissioner on the other hand is not easy work, you are responsible for 31 other personalities and we all know how weird some gamers can be lol. When recruiting you want to make sure you interview the guys you plan on bringing in, make sure they are good fits last thing you want is some bum rage quit and cut all the players off his roster to piss you off on his way out. Interviewing member prior to joining will help you get a feel of what type of player they are and if they are willing to follow rules . Try not recruit guys who are already in multiple franchises ,the last thing you want is your league to be priority number 5. I’ve learned the best way to recruit is to just play and if your league is great the word will get out.

2.Communication: Communication is key in so many ways. As Commissioner you want to have good communication when come to your league members. 1 group me message or mass text saying we advanced won’t cut it . Remind them that this league is a team and in order for it to run smoothly it will take a group effort. That means if you notice games not being played in a timely manner. Reach out to those guys and see whats the hold up. Oppose to letting weeks go by and having to boot them.

1. Commissioner : A League will only go as far as it’s Commissioner will allow it to . If your un biased, your able to communicate with your guys , and have good communication and problem solving skills your league should flourish. Always have an open door policy with your league members they should always be able get your with out your taking it personal. If your able to do all these things you should be well on your way with running a great CFM.