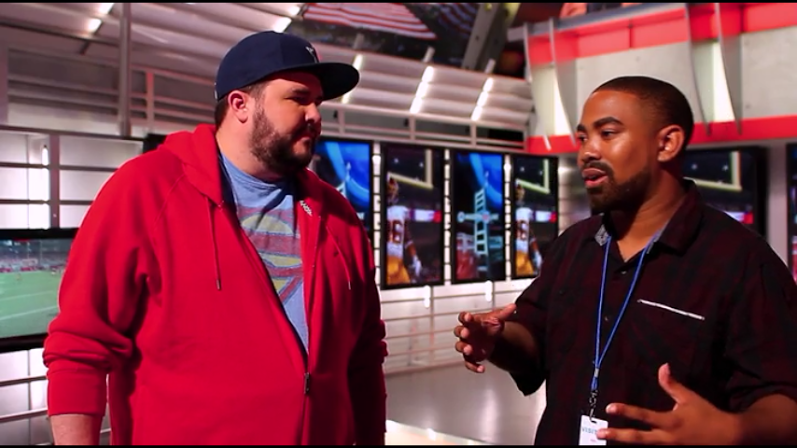 When you want to watch the NFL Network you usually turn to Channel 212 ( if you have Directv), Channel 417 ( if you have Comcast), or find the app on your Xbox 1, Playstation 4, or Smart Device. So imagine how you’d feel when an opportunity to GO to NFL Network becomes a reality. When I joined Madden Underground, I never thought for a second that we would ever have an opportunity to actually go behind the NFL programming curtain.

So I fly into LAX on a Thursday morning to meet up with Brian James (Founder of MaddenUnderground.com) and Wil Temple before we headed over to the NFL Network Studios. Being that this was a once in a lifetime opportunity. After catching up to our videographer Candace Barnett, we were then escorted to the set of Madden NFL Live. The set had so many HD televisions, screens, projection screens and NFL paraphernalia, that it looked like the perfect setup for a future Madden Tournament.
The first person to grant us an interview was Scott Cole. Scott was very upbeat, laid back, and explained the mystery of his community selected attire. He seemed genuinely interested in the state of the Madden community and was open to helping it return to its glory years. Scott also shared insight about his favorite team, style of play, favorite Madden 16 features, and favorite Madden of all time. The second person to grant us an interview was NFL great Maurice Jones Drew. MJD came over during the interview with Scott, and after a few introductions mentioned a few up and coming ballers that he knew that currently play in the WCMPL Online league. MJD talked about his favorite teams, style of play, how he uses his NFL experience when playing Madden, the impact of Madden in the NFL community, and his limited edition MUT card. By this time it was showtime, so Scott Cole and MJD joined Adam Rank to begin filming Madden NFL Live.

There are a lot of talented, hard working men and women involved with filming and directing Madden NFL Live. Virtually every one of them made sure that the Madden Underground staff were comfortable and involved during the filming of the show. So much so, that the Filming Director tweeted out our presence during the Madden NFL Live shoot. Almost as soon as the tweet went out, Hall of Fame running back Marshal Faulk showed up on the set. Faulk didn’t stay long enough to grant us an interview, but as soon as the shoot was over, Madden NFL Live’s host Adam Rank did. Before the interview, Adam made it no secret that he was looking to improve his skill level with Madden 16. Who better to help him than the subject matter experts from Madden Underground? After sharing a few “industry secrets” with Adam, we saw firsthand how to deliver an interview after 4 hours of filming. Like so many of us, he has a loyalty to and playing with his favorite team. And even though he claimed to be a casual Madden player, Adam was extremely knowledgeable of what it takes to be an “elite” madden baller. Having been at NFL Network Studios for almost 8 hours, there was still one more interview to conduct. Dylan Milner. Dylan is a senior producer and instrumental in the production of Madden NFL Live. In addition to bringing multi-media experience and expertise to the interview, Dylan shared with Madden Underground a promise of a major tournament announcement from EA SPORTS. By now we all know what that announcement was, but at that time Dylan’s insight inspired us like an early copy of Madden. As we wrapped up the final interview, we thanked the Madden NFL Live production staff for their tireless efforts to make our Madden NFL Live experience a memorable one.