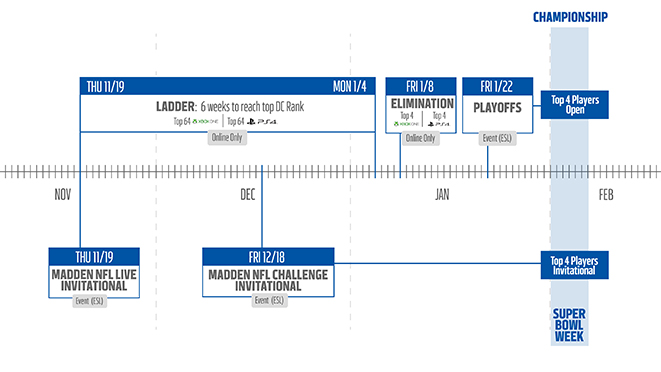 The EA SPORTS Madden NFL Live Challenge is back and players will compete in Madden’s newest mode Draft Champions Ranked.

What You Need to Know

The tournament will have multiple phases as well as an invitational phase where the best Madden players on the planet will compete for a spot in the live finals in San Francisco, CA. For more information about the tournament please visit.

Eight of the best players have been invited to the EA SPORTS Madden NFL Live Challenge Invitational which takes place live on 12/18/15 at the ESL Studios in Burbank, CA. The top four players will punch their ticket to the live finals in San Francisco, CA.

We will also have an online portion of the tournament where the players will fight for their spot into the live finals in San Francisco, CA.You can compete for your spot in San Francisco, CA by playing Draft Champions Ranked games online. The online ladder starts on 11/19/15.

Log in to play games of Draft Champions Ranked. The more you win the higher you will rise on the ladders ranking system.

One champion will be crowned and $50,000 in cash prizes will be awarded. The tourney winner will take home $20,000, and the remaining prize money will be split among the other finalists.

Below you can find the schedule for the tournament and important dates you will want to remember.