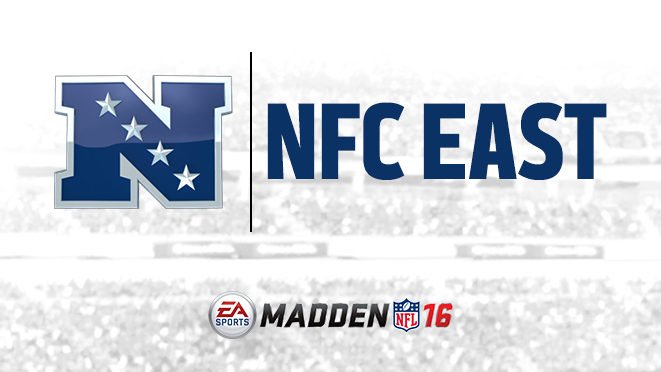 Madden NFL 16 Player Ratings continue with a division-by-division look at team and player ratings. Leading off in the NFC: the NFC East.

Can the Cowboys put last year’s heartbreak behind them, and knock off the Seahawks and Packers?

ROLB Sean Lee (89 OVR) is always an impact player when healthy. MLB Rolando McClain (86 OVR) takes over Lee’s spot in the middle. CB Orlando Scandrick (88 OVR) is a standout in the secondary.

The Eagles have a revamped secondary with new arrivals CB Byron Maxwell (84 OVR), CB Walter Thurmond (75 OVR), and rookie CB Eric Lowe (72 OVR). MLB Kiko Alonso (87 OVR) could have a breakout year after coming over in the LeSean McCoy trade.

Head coach Tom Coughlin is back for another go-around in the Big Apple. Can he take the Giants back to the postseason? QB Eli Manning (87 OVR) will look for big years out of both WRs Odell Beckham Jr. (94 OVR) and Victor Cruz (84 OVR). First-round pick Ereck Flowers (76 OVR) gets a chance to shine on Manning’s blind side. HB Rashad Jennings (80 OVR) shares the backfield with the Super Bowl hero Shane Vereen (81 OVR), as well as second-year back Andre Williams (73 OVR).

Rookie SS Landon Collins (74 OVR) joins an excellent secondary with CBs Dominique Rodgers-Cromartie (88 OVR) and Prince Amakamura (86 OVR). RE Jason Pierre-Paul (89 OVR) has had an eventful offseason, but can be a force when healthy.