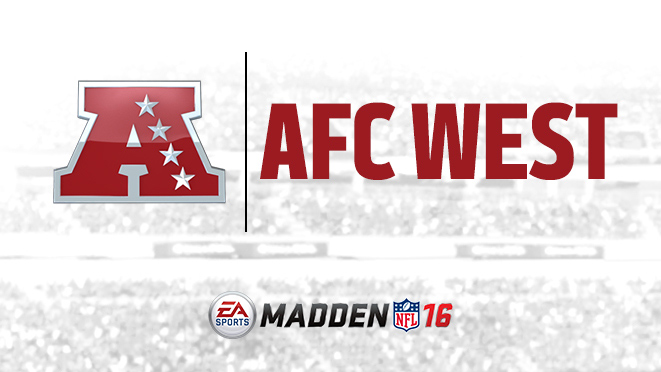 Madden NFL 16 Ratings continue with a division-by-division look at team and player ratings. We conclude our AFC Previews with the AFC West.

A one-and-done in the playoffs puts the Broncos in uncomfortable territory, but have the Chiefs and the Chargers made enough improvements to topple them?

RE Corey Liuget (84 OVR) the bright spot in the front seven, and the Chargers will need a big year from Melvin Ingram (79 OVR). The secondary is sparked by FS Eric Weddle (96 OVR) and CB Brandon Flowers (89 OVR).

LOLB Khalil Mack (91 OVR) is the star of the defense, and the other linebackers are solid with ROLB Sio Moore (80 OVR) and MLB Curtis Lofton (79 OVR). RE C. J. Wilson (74 OVR) may lose his job to rookie Mario Edwards (71 OVR) before long.