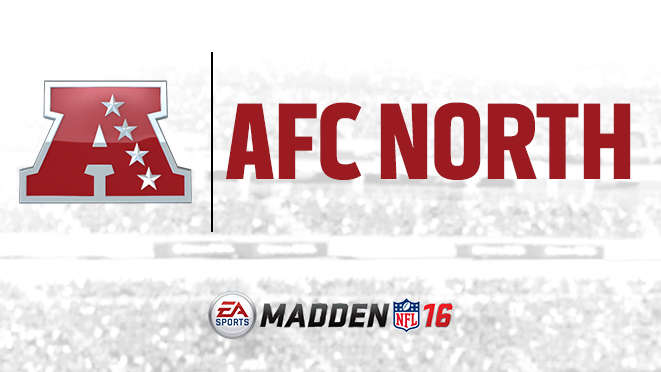 Madden NFL 16 Player Ratings continue with a division-by-division look at team and player ratings. Second up: the AFC North.

The Steelers, Bengals, and Ravens all look strong and will battle to win this division.

Despite some changes on defense, the Steelers will be strong. Big Ben (95 OVR) at QB, WR Antonio Brown (97 OVR), and HB Le’Veon Bell (94 OVR) are the offensive superstars. The other two wideout spots should be Martavis Bryant (80 OVR) and Markus Wheaton (75 OVR).

Stephon Tuitt (73 OVR) should start at RE with Cameron Heyward (88 OVR) at LE. James Harrison (84 OVR) will be challenged at OLB by Arthur Moats (80 OVR). Expect Shamarko Thomas (76 OVR) to start at SS after the retirement of Troy Polamalu.