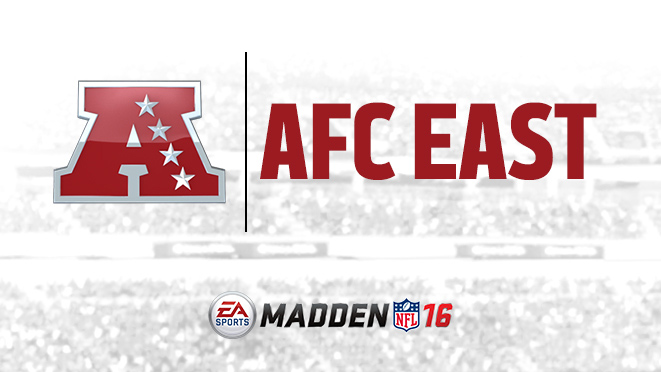 Madden NFL 16 Player Ratings continue with a division-by-division look at team and player ratings. First up: the AFC East.

The AFC East has gone through New England for much of this century, with the Patriots winning six straight division titles, and 11 of the last 12.

Is this the year for the Dolphins to dethrone them? Will the improved Bills content?

Defensive standouts include FS Devin McCourty (94 OVR) and ROLB Dont’a Hightower (93 OVR). Jabaal Sheard (84 OVR) is a quality new addition at DT. After some turnover in the secondary, Super Bowl hero Malcom Butler (76 OVR) should be a starter at CB.

The Dolphins have fallen short of the playoffs the last two seasons. Preseason will tell whether rookie DeVante Parker (76 OVR) earns a start at WR over veteran Greg Jennings (81 OVR). Ryan Tannehill (85 OVR) starts at QB along with new TE Jordan Cameron (84 OVR), while Lamar Miller (84 OVR) returns at HB.

Adding all-world DT Ndamukong Suh (96 OVR) to start alongside LE Cameron Wake (94 OVR) will crush opposing offenses. Brent Grimes (87 OVR) locks down one CB spot, and the other will be chosen from Brice McCain (76 OVR), Zack Bowman (74 OVR), and Will Davis (72 OVR).

The Bills have a lot of talent on paper, but it’s up to new head coach Rex Ryan to put it all together. He must choose a starting QB from Matt Cassell (75 OVR), E. J. Manuel (73 OVR), and Tyrod Taylor (72 OVR). New additions HB LeSean McCoy (88 OVR) and TE Charles Clay (86 OVR) should improve the Bills’ offense immensely.

The starter at QB will be Ryan Fitzpatrick (78 OVR) or Geno Smith (76 OVR), depending on preseason performance. New arrival Brandon Marshall (89 OVR) will start at WR opposite Eric Decker (86 OVR) and Jeremy Kerley (76 OVR) may get the nod at slot receiver. Chris Ivory (80 OVR) is the starting HB.

The Jets’ defensive line could be dominant, with LE Muhammad Wilkerson (96 OVR) and Sheldon Richardson (91 OVR) being bookended by Damon Harrison (88 OVR). Keep an eye on first-round pick Leonard Williams (80 OVR) as well. The Jets have reunited the band at cornerback, with Darrelle Revis (97 OVR) being joined by Antonio Cromartie (86 OVR).