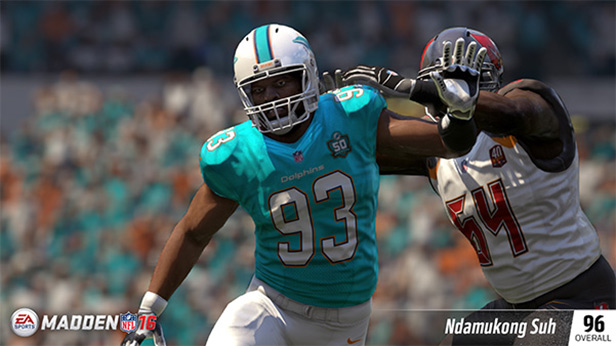 Check out the top-rated defensive tackles in Madden NFL 16.

Suh’s $114 million contract with the Dolphins is the largest ever given to a defensive player, and he should make an instant impact in Miami. His 98 Strength is best among all defensive tackles, and he also brings 97 PWM/95 POW/95 PUR/92 BKS.

McCoy is the centerpiece of the Bucs defense, and one of the top pass rushers in the NFL. His 98 Power Move is the best among DTs, and he also has 92 STR/89 TAK/87 BKS/93 PUR.

Dareus and the rest of the Bills’ excellent defensive line should thrive under new head coach Rex Ryan. Marcell is one of the best-tackling DT’s with 95 Tackle, and he also brings 94 STR/92 PWM/94 BKS.

Buffalo’s defense led the league in sacks and ranked high in every category. Williams still shines with great stats across the board like 90 STR/88 TAK/91 BKS/87 PUR and excellent 94 Play Recognition.

The reigning Defensive Rookie of the Year should be even better in year two. His Madden NFL 16 ratings include 93 Strength, 90 TAK/92 PWM/90 PUR with a DT-best 82 Speed.