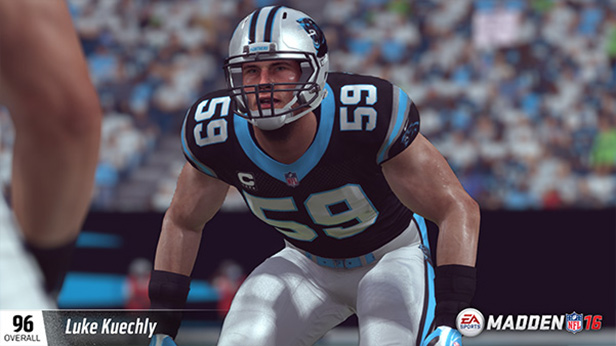 The quarterbacks of the defense are here to make playcalls and adjustments that shut down the opposition with all-new organic gang tackling.

Here are the top-rated middle linebackers in Madden NFL 16.

Nobody runs opposing players down better than Kuechly, who brings 99 Pursuit and 98 Tackle. His coverage skills are top notch with 85 ZCV/70 MCV/72 CTH and 98 Play Recognition.

After missing all of 2014, Bowman returns to a much different 49ers defense than the one he left. He brings 97 Tackle, 96 Pursuit, and 92 Block Shedding to the table as well as solid coverage with 88 Play Recognition and 82 ZCV/73 MCV.

Starting his fourth year, Wagner is one of the best in the league with 97 Tackle. He also excels with 96 Pursuit and 90 Play Recognition. He completes the package with 85 ZCV and 70 MCV.

The definition of a “high motor” player, Matthews transitioned from outside to inside and didn’t lose a step with 11 sacks. He’s still got it with 96 Pursuit, 90 Tackle, and 88 Play Recognition in addition to 75 ZCV/65 MCV.

The veteran linebacker showed up for the Ravens’ optional workouts and showed the rookies how it’s done. He has 92 Tackle, 92 Pursuit, and 95 Play Recognition along with 84 ZCV and 69 MCV.

One thought on “Top MLB Player Ratings in Madden NFL 16”