Go Beyond the Broadcast with Madden NFL 16 Presentation 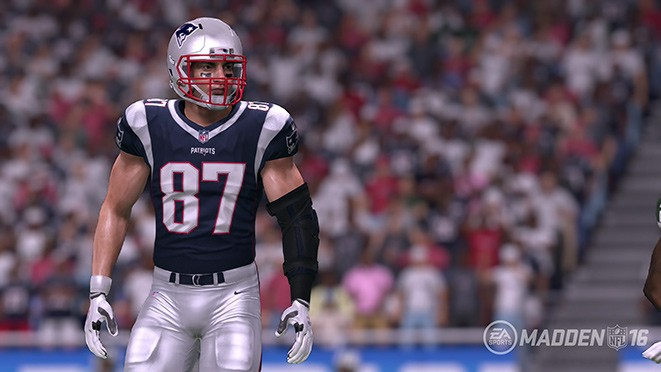 This year, the team wanted to continue to push the envelope and go beyond what normal broadcasts are able to do. While we respect broadcast and the way they produce NFL games, our team does not have to worry about restrictions like player and cameraman safety in the game

ON THE FIELD CAMERAS

Like millions of other fans, watching games on TV is how I became a fan of the NFL. So, we decided to create cameras that are grounded in reality, but are also not possible in broadcast. Thus, “On the Field” cameras were born. These cameras are close in proximity to the players during their biggest moments, including touchdowns, sacks, and even as two players from opposing teams are jawing at each other.

The team also pushed the envelope with a new Wirecam that sweeps and flies around just like a normal broadcast. However, Madden NFL 16’s Wirecam can track action and be right next to the QB right before the ball is snapped. With sweeping shots during a pass play or circling the QB before he gets sacked, the Wirecam has truly changed the way we view our game.

Another way Madden NFL 16 improved is in the way stats and ads are conveyed to players. The team went after Augmented UI, with the added ability to actually place these 3D structures in Madden. This way, we have our players moving around them to give a three-dimensional feel to the broadcast. We call these 3D elements our “Monoliths.”

Another way we use Augmented UI is with instant stats and feedback around our players on the field. Madden players can now easily see which milestones they achieved by seeing their accomplishments in a 3D space.

This new dynamic feedback system is a big interface improvement that shows important stats without distracting players with popups.

Living Worlds was another major focal point for the presentation team this year. A lot of emphasis went towards improving the crowds. We added crowd props to the game, which include rally towels (in stadiums that feature them), fan signs and foam fingers.

The frequency of props showing up – and the volume at which they appear – is all based on reference from the last three NFL seasons. The crowd signs are team-specific and feature some witty quips for each team. The fans in the crowd will also head track the action on the field this year.

One of our favorite additions this year are the female fans that are now in attendance!

In Madden NFL 16, everybody in the crowd and on the sidelines wears official apparel from the NFL Shop, including jackets, long sleeves, winter hats, and other weather-appropriate gear. No more media wearing shorts and kneeling in snow this year! The sideline media are also wearing the appropriate colored media vests based on whether they work for broadcast television, NFL Films, or as a photographer.

Another big sideline feature is the Living World Steadicam operator cameraman. You will see him standing in various places around the end zone during the game, and coming out onto the field after a touchdown to get an ISO shot on the player. Players will see the cameraman moving around from broadcast cameras and sometimes see the post play action shot from his camera and vantage point.

Madden NFL 16 also includes new audio content in stadiums, with team-specific chants and fight songs popping up throughout the league.

Post-play behaviors continues to get a huge push with more signature celebrations and related content, as well as the addition of opposing team post-play interactions. There was a big focus on cleaning up behavior after the play, including pile avoidance, how players decelerate, and how/when they react with one another. The team also added new animations for when players are frustrated with whomever is on the other side of the line.

Pairing all this new content with the great work by the broadcast presentation team puts this awesome new action on screen for players to enjoy like never before.

On the audio side, the team went to great lengths to ensure Madden NFL 16 is the best-sounding game in franchise history. The return of EA Trax allowed us to implement several new events to play in stadiums during games, and new IR Reverb tech gives each stadium a whole new feel.

Your game day experience has never sounded so authentic, and the team is excited for players to hear all the improvements.

All and all, the new presentation improvements on Madden NFL 16 are the most forward-thinking and fan-facing yet! We can’t wait for our players to experience the changes.